The Story of Bali

the Story of bali

The Story Of Bali?

Bali, The island of gods

Bali is a province of Indonesia which is located between the islands of Java and Lombok island, Bali island is also commonly referred to The Island of the Gods. Bali also has several small islands including the island of Nusa Penida, Nusa Lembongan Island, Nusa Ceningan Island, Serangan Island and Menjangan Island.

The capital of Bali is Denpasar, located in the south of the island, the island of Bali is renowned as a world tourism destination with unique art and culture. Bali island is the best place for a holiday with the world class accommodation.

The island of Bali lies 3.2 km (2 mi) east of Java and is approximately 8 degrees south of the equator. Bali and Java are separated by the Bali Strait. East to the west, the island is approximately 153 km (95 mi) wide and spans approximately 112 km (69 mi) north to south; its land area is 5,632 km².
Bali’s central mountains include several peaks over 3,000 meters in elevation. The highest is Mount Agung (3,142 m), known as the “mother mountain” which is an active volcano. Mountains range from center to the eastern side, with Mount Agung the easternmost peak. Bali’s volcanic nature has contributed to its exceptional fertility and its tall mountain ranges provide the high rainfall that supports the highly productive agriculture sector.
South of the mountains is a broad, steadily descending area where most of Bali’s large rice crop is grown. The northern side of the mountains slopes more steeply to the sea and is the main coffee producing area of the island, along with rice, vegetables, and cattle. The longest river, Ayung River, flows approximately 75 km.
The island is surrounded by coral reefs. Beaches in the south tend to have white sand while those in the north and west have black sand. Bali has no major waterways, although the Ho River is navigable by small sampan boats. Black sand beaches between Pasut and Klatingdukuh are being developed for tourism, but apart from the seaside temple of Tanah Lot, they are not yet used for significant tourism. 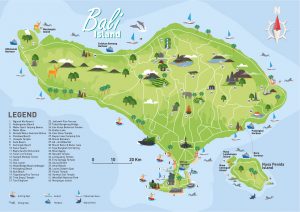 The largest city is the provincial capital, Denpasar, near the southern coast. Its population is around 491,500 (2002). Bali’s second-largest city is the old colonial capital, Singaraja, which is located on the north coast and is home to around 100,000 people. Other important cities include the beach resort, Kuta, which is practically part of Denpasar’s urban area, and Ubud, situated at the north of Denpasar, is the island’s cultural center.
Three small islands lie to the immediate southeast and all are administratively part of the Klungkung regency of Bali: Nusa Penida, Nusa Lembongan, and Nusa Ceningan. These islands are separated from Bali by the Badung Strait.
To the east, the Lombok Strait separates Bali from Lombok and marks the biogeographical division between the fauna of the Indomalayan ecozone and the distinctly different fauna of Australasia. The transition is known as the Wallace Line, named after Alfred Russel Wallace, who first proposed a transition zone between these two major biomes. When sea levels dropped during the Pleistocene ice age, Bali was connected to Java and Sumatra and to the mainland of Asia and shared the Asian fauna, but the deep water of the Lombok Strait continued to keep Lombok and the Lesser Sunda archipelago isolated.

Bali weather has 2 seasons – dry and wet – though you can expect mostly warm and humid days throughout the year. The dry season is from May to September. This offers sunny days and an average temperature of 31°C.

Most consider the mid-year period to be the best time to go to Bali. You can expect a good balance between sun, sand and surf during the time. The wet season is October to April, with occasional downpours and overcast skies. The windy months are between June and August, which Bali locals often refer to as the ‘kite season’, when the skies are dotted with colourful traditional Balinese kites. 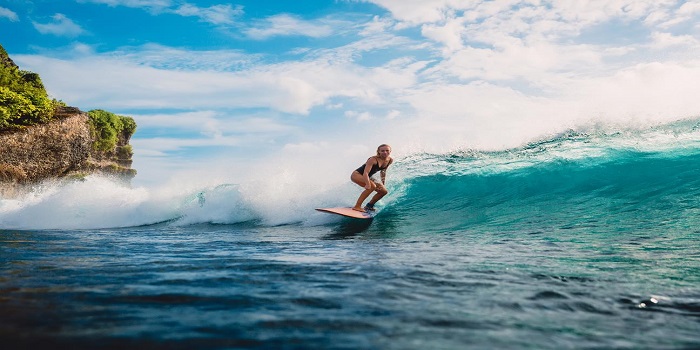 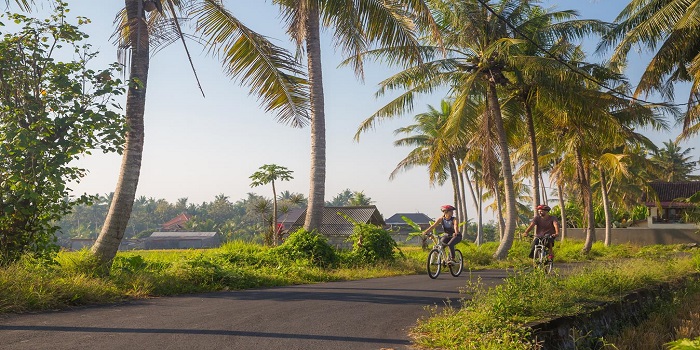 Surfers love the waves at Nusa Lembongan near Nusa Penida. These islands are a 45 minutes boat trip from Nusa Dua or from Sanur.
At Nusa Penida’s south western coast are the Manta Point and the Malibu point where divers can swim with Travally, big rays, and even sharks. Kelingking Beach, Atuh beach and Broken beach among the most famous spots of Nusa Penida. The best dive spots can be located at Menjangan island, with its reef flat, anchor wreck, eel garden and caves to explore. Located in the western part of Bali, you can enjoy the rare sight of deer swimming near the beach. Pemutaran is also famous for its diving activities renowned for reef conservation.
Try exploring or trekking the West Bali National Park, where you may get up close and personal with Bali’s rich flora and fauna, such as Jalak Bali or the Bali Starling.
Bali offers first-class adrenaline-pumping white water rafting down the spectacular Ayung River by Ubud. If you enjoy cycling, Ubud and its surrounding is a wonderful town to bike around. There are also good cycling paths at Uluwatu in the south. 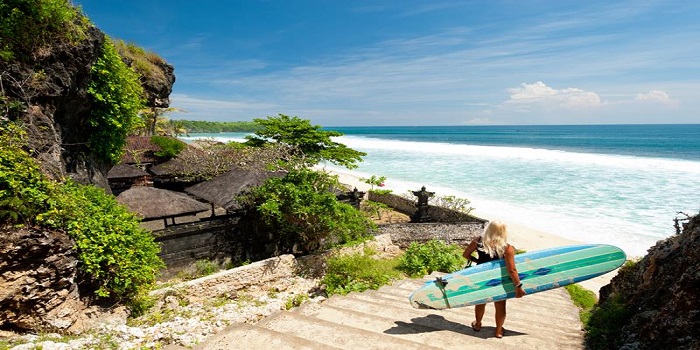 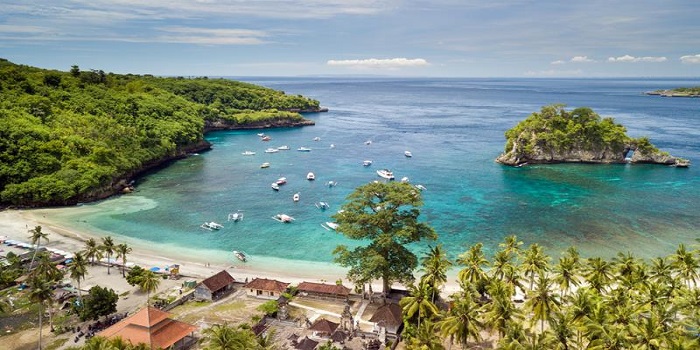 The many temples around Bali celebrate their anniversaries once every 6 Gregorian months according to the 210-day Balinese calendar. That means you’ll most likely stumble across a lively ceremony during your visit.
Towering colourful fruit offerings, decorated shrines and lively processions are all ready for your camera. Rites of passage, even death, is a festive sight as ngaben cremations or pelebon for royalties, is a sight to behold with towering effigies are carried to the funeral pyre. 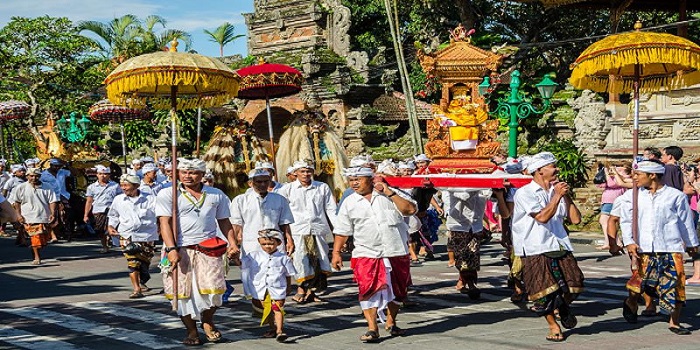 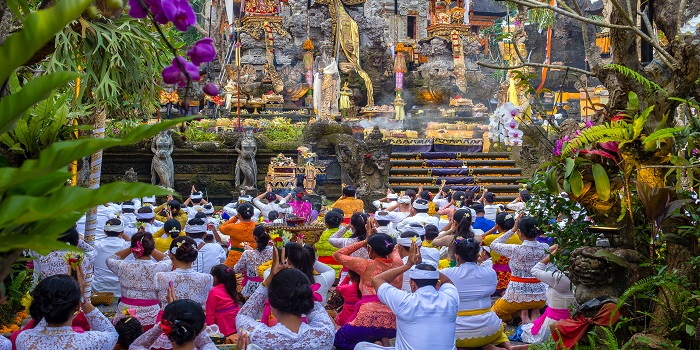 The warmth of the people

Most people who have been to Bali will agree that the Balinese are the friendliest people. Making new friends is easier here than anywhere else, as locals are often interested in engaging in a conversation with anyone, including tourists. Their friendliness and genuine warmth have made tourists feel at home for decades. 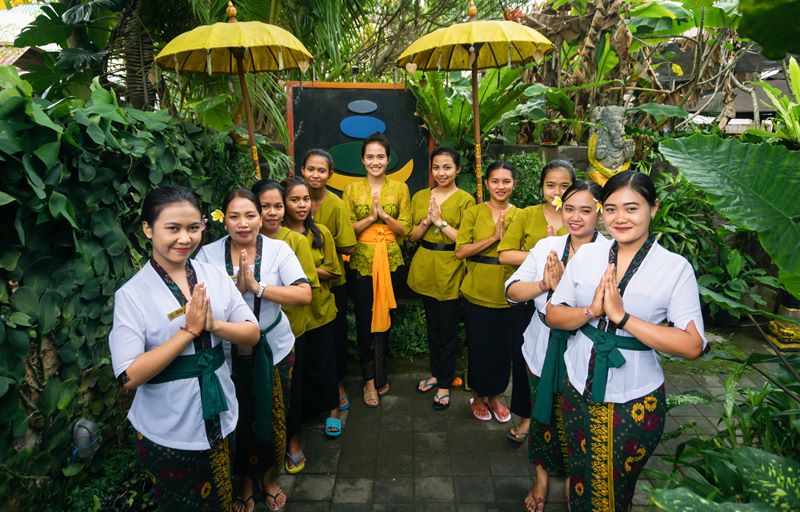