The History of Rome

the history of rome

There is, in the beauty of Rome and in its strength, a unique experience of History, from monument to monument, from Antiquity to the Renaissance, from the arches of the Colosseum to the dome of St. Peter’s, passing through the baroque fountains of Piazza Navona, Rome has been a palimpsest of overlapping temporalities for more than 2,000 years of history.

Rome, rightly named as the Eternal City, crystallizes all the periods of history that have shaped our Western civilization. To walk in Rome is to travel through time and reread a page of our culture at every step.

From early settlers to the Republic through to the Imperial age (first to fifth century AD) and Papacy, Rome has collected all sorts of the most advanced culture, politics, military organisation and fine arts the world has seen.

Extending its borders from the Iberian Peninsula, Northern Africa, Germany, Britain and to the Near East, to Asia Minor, at the height of its power, the Roman Empire embraced the entire Mediterranean basin. In this fascinating “universum”, so many shared destinies took part in a common human adventure, on both sides of the shores of the Mediterranean, the «Mare Nostrum».

Under the Pax Romana it flourished the culture which, later, inspired by Greek humanism and the Christian religion, will form the basis of “European civilization”. At the court of Charlemagne, the clerics who rediscovered the classical texts, in fact, called the Emperor a “pater europae”. 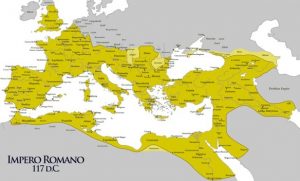 The Roman Empire, thanks to the Romanization of the provinces conquered over the centuries, became the first successful attempt of legal, cultural and economic integration.

It was under Augustus that Rome first began to look like a world capital: its splendid monuments hewn from richly colored marble were, Pliny the Elder wrote in A.D. 70, “the most beautiful buildings the world has ever seen.” With the completion of the Colosseum in A.D. 80 and Emperor Trajan’s massive Forum in A.D. 113, the image of Rome we carry today was virtually complete. With more than one million inhabitants, the megalopolis had become the greatest marvel of antiquity: “Goddess of continents and peoples, Oh Rome, whom nothing can equal or even approach!” gushed the poet Martial in the early second century A.D.

Latin has remained, until modern times, the basic language of intellectual exchanges and ecclesiastical, as well as the language used in legal documents.

Once the status of Civis Romanus was granted (from 200 AD), every citizen of the Empire would enjoy equal rights. This idea thus prefigures the legal form of today European citizenship!

The word Rome’s anagram spells Amor, which in Latin means Love and derives possibly from A (not) and Mors (death). Love has the same root as Life. Here is another reason why the City is known as ‘the Immortal’.

The scene, which we could say of an ancient “clinic”, sees the doctor Japix, kneeling, intent with a scalpel to heal a cut on Aeneas’s right thigh, while the worried mother Venus comes to help her son. The goddess holds in her right hand the veil under which a precious diadem appears to shine, while -under the reassuring arm of her father- little Ascanio, future founder of Alba Longa, wipes his tears of anguished with a cloth. The hero watches gratefully and confidently at her mother as she hands him a bundle of providential alfalfa.

After the fall of the late Empire in the fifth century AD, Rome underwent a series of dramatic changes in a period known as ‘dark centuries’ before resurrecting under the rule of new Kings, the Popes. At the end of the Medieval age, it was ready to become of two leading cities where a cultural movement now known as Renaissance took place. The other city is called Florence, and it lies today at 2 hrs from Rome’s central rail station on the excellent fast Italian train, called ‘Pendolino’ (‘The swinger’).

In fact, the center of the Italian Renaissance shifted from Florence to Rome throughout the 15th century, as it became a beacon of humanist ideals.

The Renaissance in the city-state of Rome began in the early 15th century during a time of relative peace.  This allowed art and other Renaissance pursuits to flourishIt was an incredible time of beauty, blossoming with creativity and curiosity. It led to the rise of Italian geniuses like Leonardo da Vinci, Galileo, Dante, Michelangelo and much more. Famous artists such Andrea Mantegna, Giovanni Bellini, Titian, Raphael, Botticelli, Donatello all producing their famous masterpieces during this era. 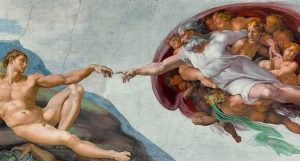 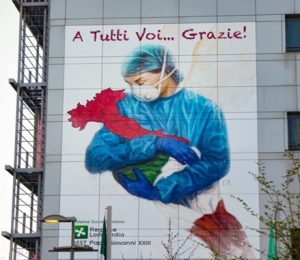 Italy and Rome have suffered massively from the first wave of the Covid pandemic in Europe. Italy has the second largest death toll after Britain from 2020, nevertheless its vaccine campaign organised under military rules by a very effective Government has gained fast momentum.

Currently, eleven million (20%) people in Italy have received a full vaccination regimen (two doses) and all people over 50 are covered.

VISITORS FROM ALL OVER THE GLOBE

Italy is preparing itself to accept visitors from all over the Globe for the upcoming touristic season, that thanks to its wonderfully mild climate stretches from April to late October. The offer in terms of hospitality, recreation, arts, culture and nature has simply no equal on Earth.

And why not? Undoubtedly the fundamental posture of the traveller in Rome is therefore that of the stranger – viator, hospes, pilgrim – who interrogates the city and scrutinizes the words of its stone.

The prestige of a city is not just about its history, its monuments, its institutions, its inhabitants, and the beauty of the nature that surrounds it. The prestige of a city also depends on those that it has been able to attract to itself, to hold them and send them back to their native country passionate about it and penetrated by its nostalgic.

Everyone should be given the opportunity to visit Rome in their lifetime. The blend of different cultures through the endless historical layers of the place is a testimony of our existence on this Planet as human beings and an invigorating break from our busy professional lives.

An ancient Latin motto recites ‘Historia Magistra Vitae’ and that is what Rome will give you, a teaching for your own life.